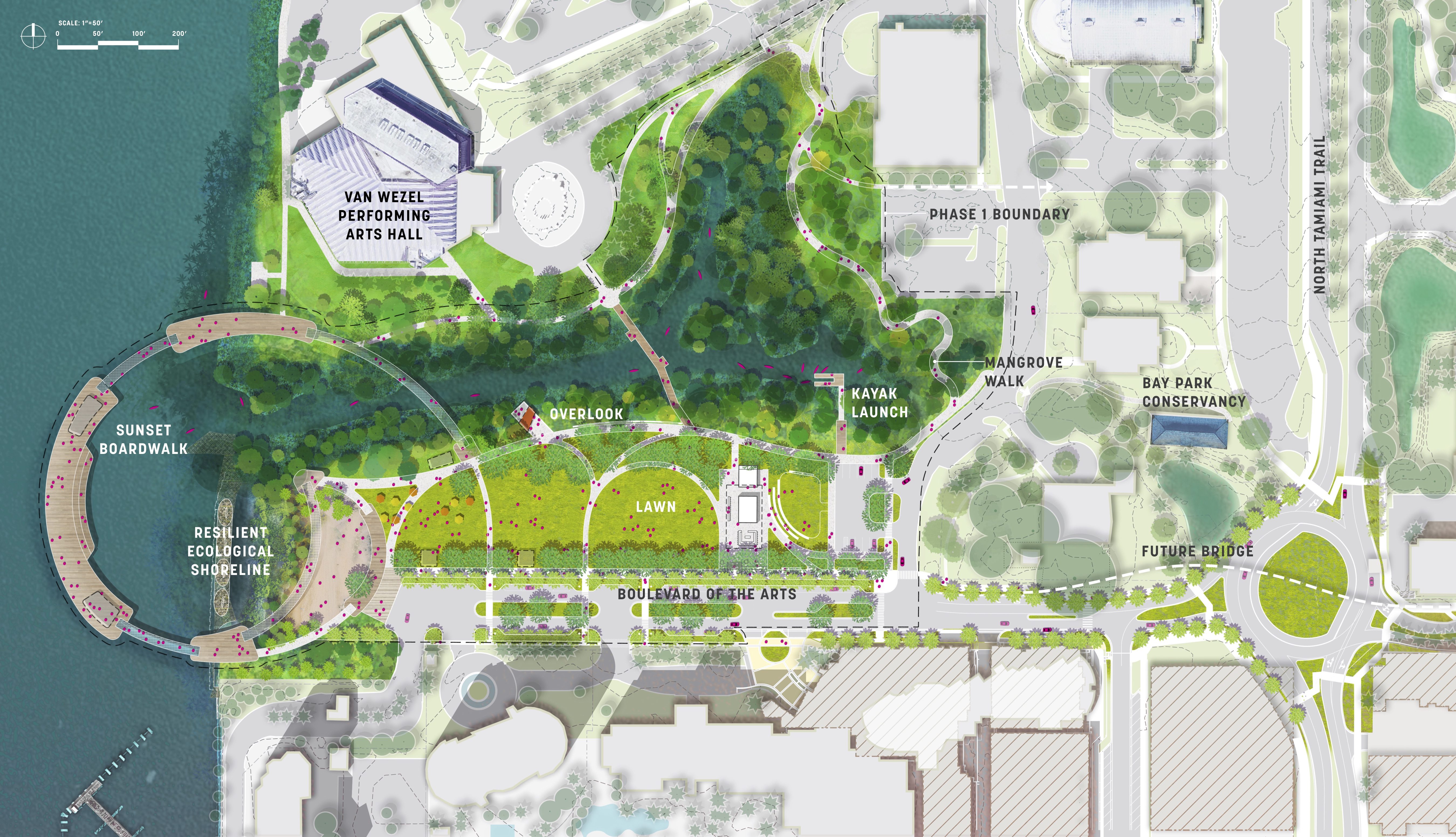 With an update on recent tweaks to the first phase of The Bay project, coupled with the city’s go-ahead to begin work on a detailed site redevelopment plan, officials think they finally have an opening date for the nine-acre strip of land that borders Boulevard of the Arts, at the southernmost end of the proposed 53-acre waterfront property.

The Bay’s founding CEO, AG Lafley, said that could be as early as January 2022.

But don’t strap on your walking shoes just yet. The project first needs a few community workshops, two public hearings and stops at the city’s Planning Board and City Commission before any formal groundbreaking can take place. If all of that is wrapped up by June 2020, it’s smooth sailing from there, Lafley said.

“If all goes according to plan, we will have a pretty substantial park that we can all use,” Lafley told members of the Sarasota Tiger Bay Club at Michael’s On East on Thursday.

This portion of the park would be a sort of down payment on a 20-year build-out to take place in four or five additional phases.

The latest renderings from The Bay show a one-acre lawn between a restored bayou and Boulevard of the Arts, with a small food pavilion looking west to a circular pier called the “sunset boardwalk.”

The spiraling pier is meant to avoid disrupting the seagrass and mangroves in the area, as well as to help preserve them. The curving shape also provides the potential for sunset look-outs and viewing the life underwater, one of several environment-oriented details of the project, including stormwater drainage improvements for a site that is currently 75% surface parking.

“If you understand the ecology of this community, you understand that the site is currently a stormwater nightmare,” said panelist Jon Thaxton, a former county commissioner and an environmental advocate. “There are three or four significant discharges there that were designed before the (federal) Clean Water Act. This is an opportunity to treat a lot of the stormwater from the downtown area.”

Helping that transition is cutting the current number of 1,400 parking spaces in half — something that will gradually occur over the next decade during various phases of the project.

“It’s an adapt-as-we-go approach,” said Bill Waddill, The Bay’s chief implementation officer. “We know we will see many more people walk or ride their bikes from the south and the north. But we recognize that we will need enough parking on the site to accommodate.”

Waddill said that as the city completes roundabouts and adds signalized crosswalks along U.S. 41, it will slow traffic and help pedestrians safely cross from west to east.

Parking consultants for the city and others are in consensus that the park will need about 1,000 parking spaces, Waddill said. Helping with the additional need will be valet and implementing technology companies such as Uber and, eventually, automated vehicles.

There will be 10 to 15 years “to see if these technologies will work,” and “we will do our best to get it right,” Waddill said.

Conceptual designs for the new Performing Arts Center call for a three-story single structure on stilts that can accommodate approximately 200 parking spaces underneath.

“What on earth are you thinking?” said Dan Lobeck, a Sarasota attorney and president of Control Growth Now. “The majority of people here aren’t going to walk or bike to the [Performing Arts Center].”