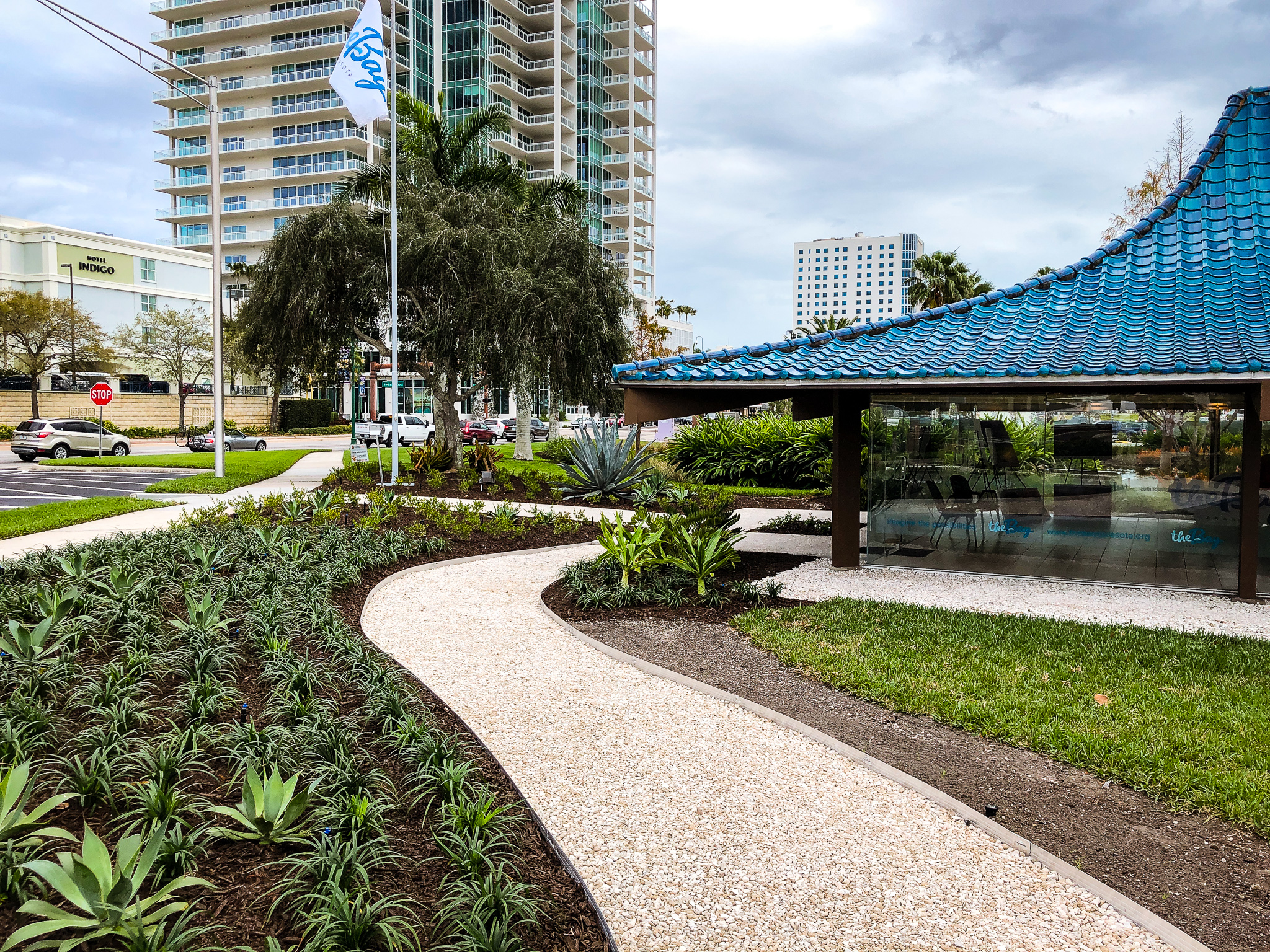 Construction on Sarasota’s The Bay project to start next month

The original article by Timothy Fanning appeared in the Herald-Tribune on March 12, 2021.

For Jon Thaxton, transforming the dream of an urban oasis on downtown Sarasota’s bayfront into reality would take one pathway to success and a thousand to failure.

One step at a time, and after nearly a decade of planning and community collaboration, that path to build The Bay project finally broke into a clearing this week.

With more than $10 million in the bank and a site plan approved by City Hall, the first phase of an ambitious yearslong effort to redevelop 53 acres of city-owned land south of the Van Wezel Performing Arts Hall into parkland will break ground in a few weeks.

Spread across 10 acres on Sarasota’s cherished waterfront north of Boulevard of the Arts, it is hoped the park’s amenities will satisfy the interests of residents and visitors for generations to come.

An open lawn, a food and beverage pavilion, a walkable mangrove bayou and a circular sunset boardwalk over the Sarasota Bay, leaves ample room for what members of The Bay Park Conservancy anticipate will be a welcoming space for all of Sarasota.

“Let’s celebrate the victory but now let’s look forward,” said Thaxton, a former county commissioner and senior vice president for community investment for the Gulf Coast Community Foundation. He’s been an at-large consultant for the project since the beginning.

“We need to move on to the next step,” he said. “We need to keep the momentum going while we have it.”

Over the next few weeks, Sarasota will begin to pull building permits. Construction on the lawns, the paths and the restroom pavilion is expected to begin within the next month. The lawn portion will likely open next spring.

The U.S. Army Corps of Engineers will also need to grant a permit to build the circular boardwalk over Sarasota Bay – something The Bay Conservancy expects will happen over the next year. Work on the boardwalk will likely wrap up by 2023.

In the coming months, the city will craft certain operating details, including park hours. The project has drawn opposition from residents of nearby Condo on the Bay. They have taken issue with the circular boardwalk and the interlocal financing agreement. They have also raised concern about potential noise from outdoor events and other issues – items that will be worked out later.

Those involved with the project since the beginning expressed a range of emotions this week, from relief to utter excitement.

“I was thrilled and super excited for the possibilities for the future,” said Michael Klauber, the president and founder of Michael’s On East.

Klauber originally envisioned the idea back in 2013 after he, Thaxton and others visited a dilapidated railway yard in Nashville. The project, now dubbed Nashville Yards, transformed the edge of downtown into a vibrant park and residential area.

“Why couldn’t we do something fabulous with all this space on our bayfront,” Klauber recalled thinking. He said it out loud after visiting Nashville. “I said hey, why can’t we do that in Sarasota.”

“I got strange looks,” Klauber said.

But it didn’t take long for the idea to build momentum. Thaxton jumped on board, as did Visit Sarasota president Virginia Haley and so many others.

Later that year, Bayfront 20:20 was formed. The goal was to create consensus among community and neighborhood leaders about what the future could be for the bayfront. Leaders then sought buy-in from the Sarasota City Commission.

In 2017, The Sarasota Bayfront Planning Organization, an independent not-for-profit organization led by community and business leaders, was founded to implement the long-term master plan for the park. The firm would later be renamed to the Bay Park Conservancy. Boston firm Sasaki was tapped to lead the redevelopment effort. The City Commission approved the master plan a year later.

In 2019, the commission voted to approve the partnership between the city and The Bay Park Conservancy, allowing the organization to take the lead on new building developments and authorizing them to move forward with the first phase of the project.

After city commissioners approved an implementation plan for the project’s first phase, the organization quickly went to work by remodeling The Foundation Garden near Boulevard of the Arts, breaking ground on the Mangrove Walkway. The western portion opened in October and features a new pedestrian and bicycle path, new landscaping and benches.

In November, the city and county finalized an agreement to create a $200 million funding deal for The Bay – a substantial accomplishment because the city and Sarasota County were recently at odds over a similar funding arrangement for a different project. Over the next 30 years, a special taxing district will generate money for The Bay Park and the future Sarasota Performing Arts Center.

“It’s impossible to over speak the value that was attained by getting a strong vote of confidence from city commissioners,” Thaxton said the afternoon following the City Commission meeting. “That is going to play very heavily in the minds of future donors.”

The money generated from the special financing district will go toward the construction of the remainder of the park.

“To finally be at the point where we can actually break ground on our first big phase is just … I’m really excited to be at this point,” Waddill said. “We’ve got a fantastic design and we can’t wait to implement it and provide a great place for our community to come and enjoy.”