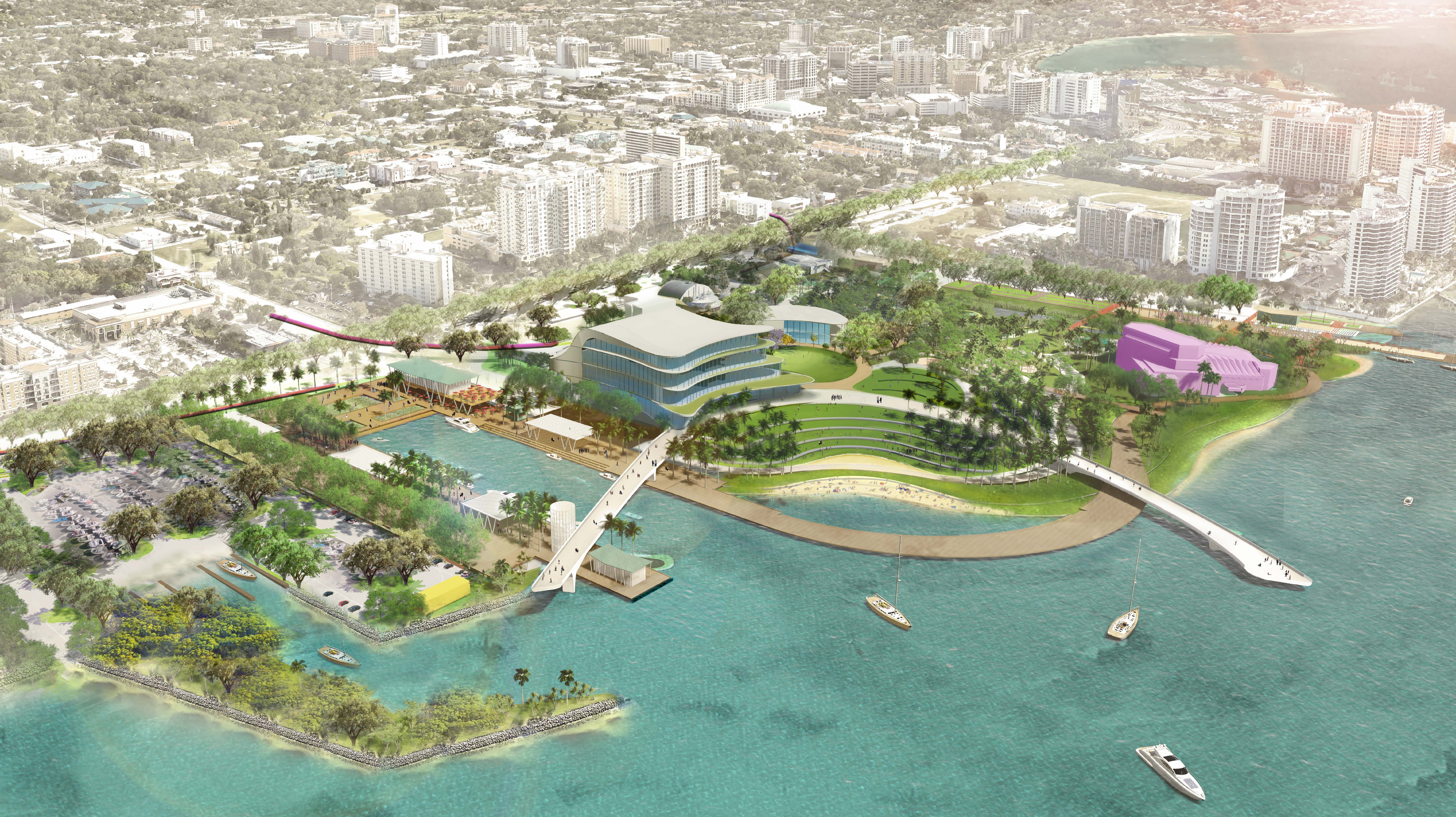 Note: This article was originally published by YourObserver.com on March, 21, 2019.

Sensing substantial discomfort regarding a proposed agreement between the city of Sarasota and an independent group formed to manage the development of more than 53 acres of public bayfront land, A.G. Lafley suggested it was OK to take a moment to keep working on the document.

As long as that moment doesn’t stretch on for too long, that is.

Lafley, a key leader in the bayfront planning process, is currently Startup CEO of The Bay Park Conservancy. The conservancy is the proposed model for managing the redevelopment of the land surrounding the Van Wezel Performing Arts Hall; it’s an independent organization responsible for plotting the construction of the project and managing the park once it’s built.

Throughout the planning process, Lafley has stressed the importance of not rushing to meet deadlines at the expense of the final product. He reiterated that belief at Monday’s City Commission meeting, as commissioners debated the best way to establish a partnership with the latest configuration of The Bay. After producing the bayfront master plan the city adopted in September, the group’s leaders have worked to form the conservancy group.

Although The Bay leadership hoped the city would approve a partnership agreement by April 1, when city officials indicated they needed more time to review the terms of the partnership, Lafley said it was important to make sure things got done right.

“I think we should stay criteria-driven, not schedule-driven,” Lafley said.

And yet, The Bay is still pushing to move forward soon. Lafley and other bayfront planning leaders successfully lobbied the city to extend the negotiations on the partnership agreement by two weeks, expressing confidence any issues could be sorted out quickly — despite some skepticism from city leaders.

If The Bay wants to stay criteria-driven, then what’s the rush? According to the group, there’s a delicate balance between careful planning and maintaining forward progress in pursuit of the final project. Momentum is crucial, said Lafley and others, with outside parties questioning the city’s commitment to the plan.

Among The Bay’s leadership, there’s concern the ongoing public vetting of the partnership could create a protracted process that jeopardizes the realization of a community vision.

Dan Lobeck, an attorney and active critic of the conservancy agreement, took some offense at the notion his concerns were just huffing and puffing.

Since February, when a draft term sheet first outlined the proposed responsibilities of the city and The Bay regarding the development of the property, Lobeck has seen issues. He feared the city would not have enough oversight over its own property, that the fundraising obligations of The Bay were not clearly stated.

He worried that, if the agreement shared Monday was approved without substantial changes, the city would be subject to the whims of an independent group when it came to the development of the bayfront.

“My biggest objection was that the contract, as presently drafted by The Bay Park Conservancy, commits the city and the taxpayers 100% to not only this $150 million construction project, but also to its ongoing maintenance to the tune of many millions each year,” Lobeck said.

The Bay’s leaders described Lobeck’s characterization as a fundamental misreading of the document — and of the goal behind adopting a partnership agreement at this point in time. Bill Waddill, The Bay’s managing director, said the agreement is designed to serve as a framework, so there’s a reason why specific details outlining things like cost obligations aren’t included. He said the group can’t work toward those specifics until the initial agreement is in place.

Waddill said the plan is to build out the project in phases, beginning with a $20 million segment along Boulevard of the Arts. The plan is that each phase will use a mix of public and private funding sources. Because the park will likely be built out over the course of more than a decade, it’s uncertain where, exactly, the funding will come from for each phase.

The Bay intends to submit plans — including financing models — on a phase-by-phase basis to the city for review and approval. Waddill said this creates a process of continuous oversight for the city. He said the city would retain ownership of the underlying land, and The Bay could not to force the city to move forward with plans it did not want to approve.

Waddill also shared a sentiment expressed by other members of The Bay: The organization was responsible for producing a community-driven master plan for the land the city felt comfortable adopting. As a result, the group felt it had earned some credit for its work, some degree of assurance The Bay would continue to work in the public’s best interest.

“I think there are a lot of safeguards,” he said. “But at the end of the day, you’ve sort of got to trust that you’ve got a good organization. Take a little bit of a leap of faith, knowing you’ve still got a lot of steps along the way where you’ll still be able to check in.”

Still, Lobeck saw Monday’s meeting as a vindication of his objections. At the meeting, Commissioners Jen Ahearn-Koch and Shelli Freeland Eddie expressed concern about the language in the document, with Ahearn-Koch advocating for more city representation on The Bay’s board.

City Attorney Robert Fournier was also uncomfortable with the document. He said he hadn’t had time to adequately review it because he hadn’t received policy input from the commission before this week.

“I have some concerns or issues about the specificity of some of the delegation of authority,” Fournier said.

Lobeck was one of several speakers at Monday’s meeting who took issues with The Bay’s attitude toward those who questioned the terms of the agreement. He said the city had an essential obligation to thoroughly vet any agreement with an outside group — particularly for a project this significant — no matter the good intentions that group claimed to have.

Lobeck was encouraged by the city’s decision to take more time to make adjustments to the proposed agreement. His biggest question was The Bay’s willingness to accept what he saw as necessary oversight.

“It remains to be seen whether they will, in fact, allow elected public officials to have control over public property,” Lobeck said.

In the wake of Monday’s meeting, Waddill expressed confidence the city and The Bay could finalize the conservancy agreement by April 15. And although some might question the rush to get the agreement approved, Waddill painted the situation in a different light.

The Bay’s leaders have been working since September in pursuit of the conservancy agreement. The formal bayfront planning process began in 2017; the initial push to redevelop the bayfront began in 2013. For Waddill and others, the danger is not moving too quickly. It’s not moving quickly enough.

“One of the worst things you can do is really do a great job of engaging the community in a process — and then either not build it or wait four or five years to build it,” Waddill said. “You lose momentum. You lose public trust.”