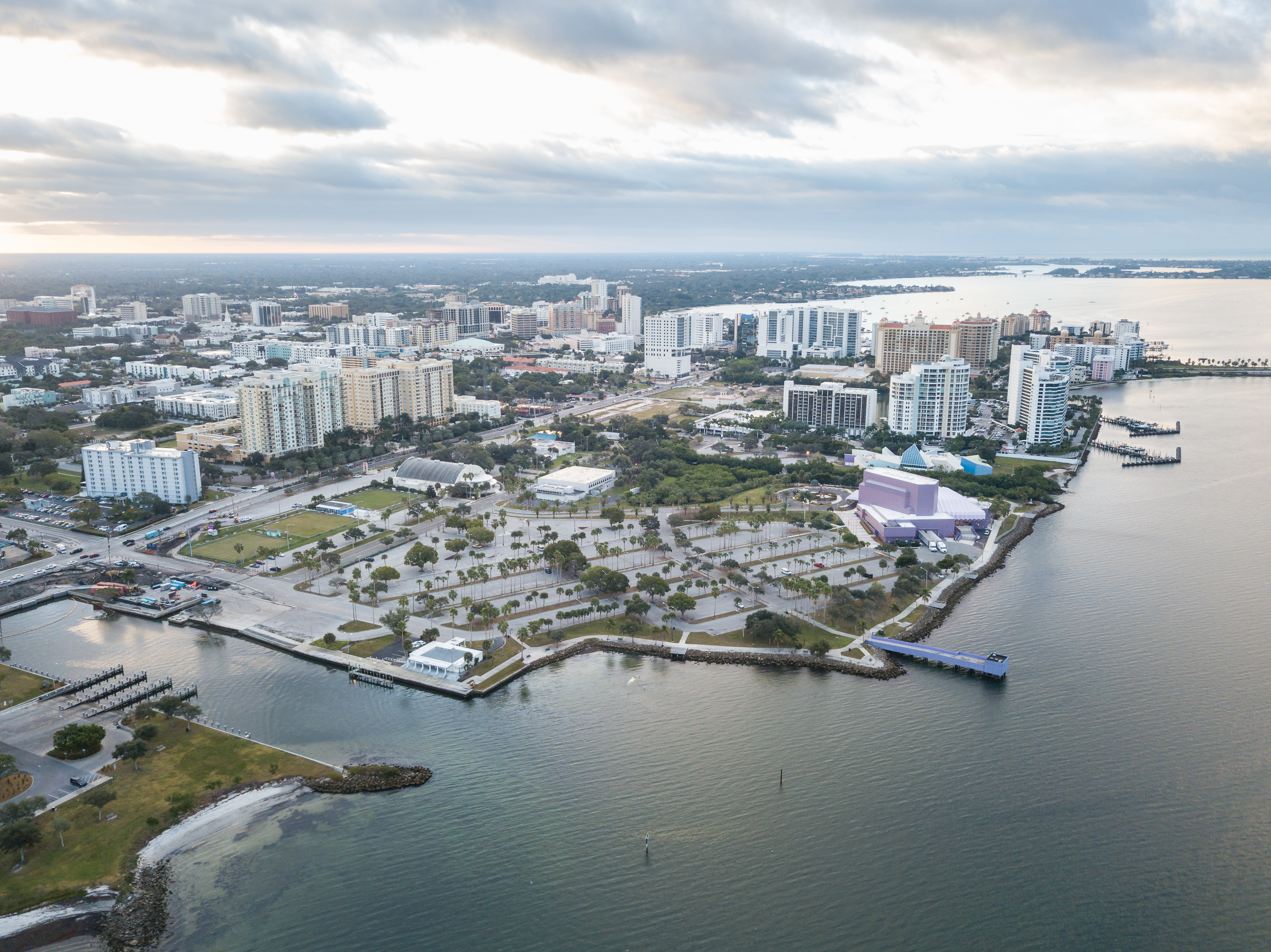 Yes, the city can hardly afford more financial burdens. But the best bet for the bayfront is to seize an opportunity that likely won’t come again.

Note: This opinion was originally published by YourObserver.com on April 10, 2019.

This really should not be big drama.

Come next Monday, the Sarasota City Commission will consider once again whether to approve a partnership agreement with the Bay Park Conservancy.

The vote should be unanimous — in favor of the agreement. It’s the next step necessary toward the vision of redeveloping those 53 priceless bayfront acres from a sea of bumpy asphalt into a spectacular public landmark.

As the saying goes, it should be a “no-brainer.”

But, of course, this is Sarasota. It’s never easy.

Sarasota city commissioners have a history of being possessive, micromanaging and not giving up control. After all, being an elected official is all about power.

And in this instance, we also know there are the naysayers who say all of this — redeveloping 53 acres, building a new performing arts center and forming a conservancy to manage and operate the park — sounds wonderful. But what about the money? From where is the $400 million or so for the park and performing arts center going to come? Taxpayers? Hah! The city already is awash with enough financial problems. How can it possibly think of asking taxpayers to carry even half of that load?

Many of the city’s financial problems can be fixed with better fiscal management and commissioners making tough decisions (e.g. scrapping the $20 million Bobby Jones Golf Club project and selling that property. That cash would do wonders.)

But here’s a reality: The 53 bayfront acres surrounding the Van Wezel Performing Arts Hall — indeed, that vast parking lot — are underutilized and being squandered. Everyone can admit that prime property can be so much better and put to a better, higher use.

Everyone also can — and should — admit the Van Wezel Performing Arts Hall has served its time. It’s 50 years old and cannot be retrofitted to meet the community’s needs for the next 50 years.

As we have written before, if the citizens of Sarasota want to be and have a vision of their city being what they claim it to be — the cultural arts capital of Florida — now is the time to make that happen. As the saying goes: “It is one’s duty to make the most of the best that is in him.”

This is the time to do that.

Indeed, Sarasota city commissioners should lift themselves 30,000 feet above the details in the proposed partnership agreement and seize this historical opportunity.

Look at the gifts you are being handed:

• The Bay Park Conservancy. This citizen-shaped, not-for-profit corporation is pledging to take responsibility for developing, operating and being the stewards of the city’s most prized property.

As much as elected officials and city administrators are reluctant to let go, commissioners and administrators do not have the expertise or time to devote to what will be required to transform that bayfront acreage into what it should be.

Entrust the conservancy do it.

• A.G. Lafley and the conservancy board. Lafley twice served as chairman and CEO — the most successful in company history — of Procter & Gamble, the largest consumer-products company in the United States (100,000 employees) and one of the largest in the world. Now retired from corporate life, Lafley has volunteered to be CEO of the conservancy. This is an extraordinary gift, a gift of proven leadership that, in all likelihood, will not occur again for the city of Sarasota. Lafley is at that stage in his life when professionals who have endured the pressures of leading a multi-national company shy away from multiyear, full-time commitments. Commissioners should not squander the limited time of Lafley’s leadership.

Likewise, consider the board members providing oversight to the conservancy. They are all accomplished, civic-minded professionals — volunteers all — who understand the gravity and responsibility of the challenge and who want to see Sarasota make the most of the best that’s in it.

Executing this partnership agreement is not just a commitment to propel the development of the Bay Park. It also will be a crucial signal and step toward the second and equally important piece to the grand vision: a new Sarasota performing arts center. The Van Wezel Foundation is poised to take on the task of developing a signature performing arts center that meet’s the city’s aspirations and do it in collaboration with the Bay Park Conservancy.

Imagine the fallout, discord, delays and confusion that will follow if commissioners reject the partnership with the Bay Park Conservancy. Say goodbye to the vision.

In the grand scheme, while this moment will be a big, bold step for the city of Sarasota, forming a partnership agreement with the Bay Park Conservancy is not all that risky. In a 52-page report from four years ago, authors Peter Harnik and Abby Martin of the The Trust for Public Land’s Center for City Park Excellence, noted:

“There was a time when urban parks were firmly considered the pride, joy and responsibility of taxpayers. Once a park was in the public domain, all agreed that its weight was to be carried on the shoulders of city government. No longer.

“Today’s favored revitalization structure is the conservancy … Most significant, the movement is growing rapidly …”

Lindy Eichenbaum Lent, director of Denver’s Civic Center Conservancy, told Harnik and Martin: “Conservancies exist because the projects they’re working on are really difficult. It’s important to acknowledge that the issues they’re founded to tackle have eluded other efforts.”

Anne Olson of Houston’s Buffalo Bayou Partnership, told the authors: “These partnerships are essential for keeping parks in good shape without having to compete for limited funding in every budget cycle. The public and private sectors each strengthen the other’s funding commitments and management capabilities.”

To be sure, partnerships between cities and conservancies are not easy. They take constant effort on multiple fronts. Just read Harnik and Martin’s “Public Spaces/Private Money: The Triumphs and Pitfalls of Park Conservancies.” It’s a road map that Bay Park Conservancy members have researched in depth to avoid the pitfalls.

No one, of course, knows how a partnership between the city and the Bay Park Conservancy will turn out. Our personal view has always favored privatizing most of that acreage, embracing the idea the private sector is always a better steward of property than is the public sector.

But that scenario was never a consideration. Of the options remaining, the conservancy model offers the best prospects for success. Commissioners, do it. Don’t blow it.