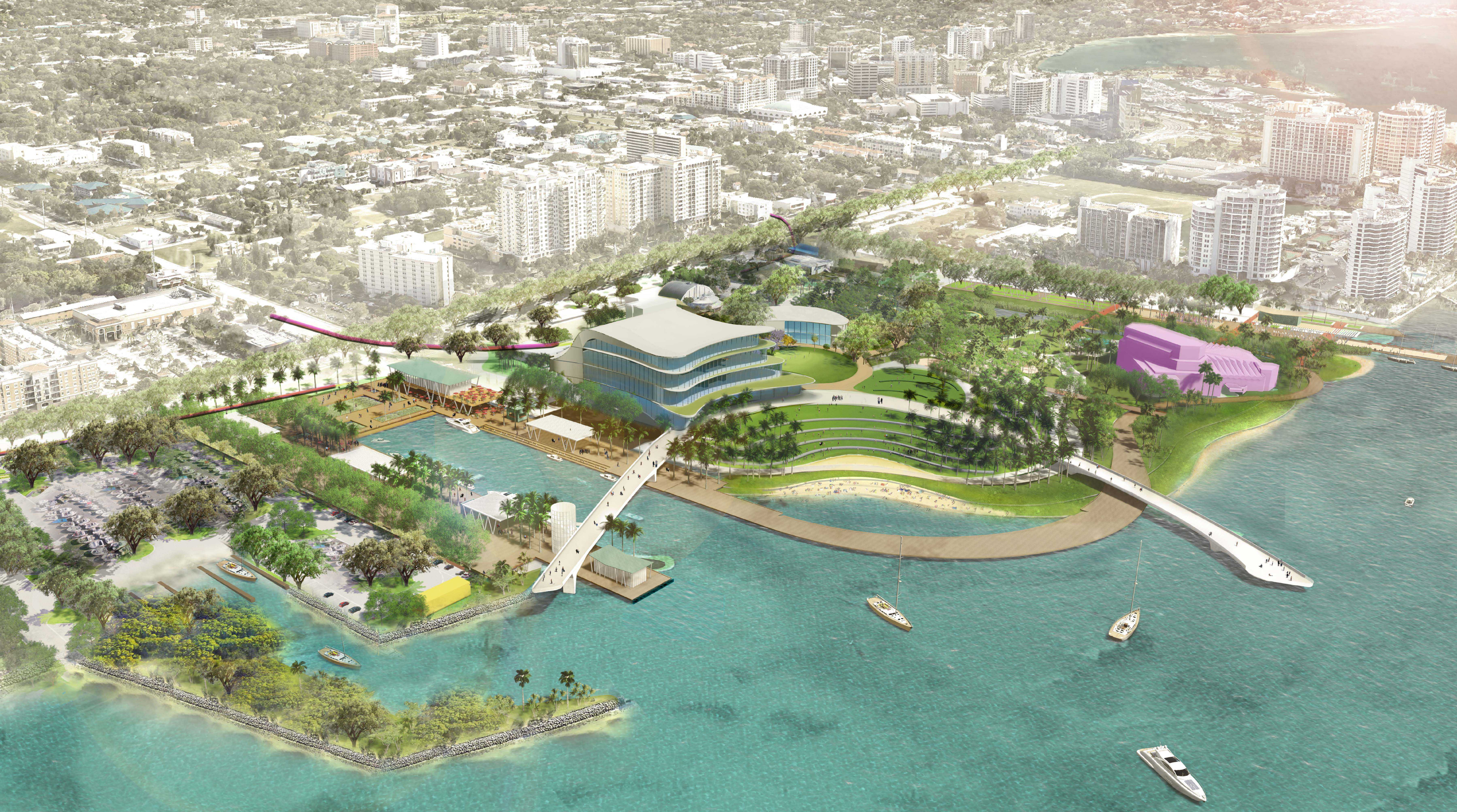 The original article by David Conway appeared in the Observer on October 20, 2020

Although some commissioners had reservations about aspects of the arrangement, the board unanimously agreed to steer tax revenue toward bayfront redevelopment.

The city of Sarasota has approved an agreement that’s projected to funnel nearly $200 million in local tax revenue toward the construction of The Bay Sarasota park project and a new waterfront performing arts center.

On Monday, the City Commission voted unanimously to approve the terms of an interlocal agreement with Sarasota County authorizing the creation of a tax increment financing district along the bayfront in downtown Sarasota. If the county also approves the deal, the TIF agreement would capture increases in property tax revenue from within the district’s boundaries, setting aside those funds for capital expenses associated with redeveloping 53 acres of city-owned land surrounding the Van Wezel Performing Arts Hall.

Although some city commissioners expressed concerns about specific aspects of the agreement as written, the entirety of the board voted in favor of moving forward with the public-private funding partnership. The city is working on the project with The Bay Park Conservancy, an independent group established to lead the development and long-term management of the bayfront site.

Ahead of the vote, representatives for The Bay called the funding agreement a critical catalyst for making the bayfront master plan the city adopted in 2018 become reality.

“It’s a huge collaboration,” said A.G. Lafley, The Bay’s founding CEO. “It’s a huge step forward for our two governing bodies and frankly for our community.”

The agreement establishes the TIF district through 2049, though there are terms allowing for the dissolution of the district earlier than that. The TIF would capture 95% of any increases in property tax revenue above the baseline year of 2019, though it will not start collecting funds until 2021. According at a presentation at a September County Commission meeting, the TIF is expected to generate $189.4 million over 30 years.

The proposal said that fifth member would be either a representative of The Bay Park Conservancy or a member of the general public. City Commissioners Jen Ahearn-Koch and Shelli Freeland Eddie both objected to that provision, stating they felt the fifth representative should be a resident within the boundaries of the district.

“I think it’s critical that there’s someone from the TIF district who is contributing tax funds to have a say as to what happens to the property,” Freeland Eddie said.

City staff expressed concern that revising the agreement to require a board representative from within the district could complicate the process of getting the county to approve the deal. A majority of the commission agreed not to pursue the change, instead revising the agreement to state the fifth representative would be a member of the general public.

Because each phase of the park’s construction must gain approval from the City Commission, Commissioner Liz Alpert said residents within the TIF district would have ample opportunity to provide their thoughts throughout the development of the bayfront site.

“The public is going to get a lot of input at every public hearing on everything that happens there,” Alpert said.

The board also had questions about how the TIF money could be spent, expressing an interest in using some funds to improve connectivity between the bayfront site and other parts of the community. The TIF agreement allows funds to be allocated toward multimodal transportation improvements within the district’s boundaries. Bill Waddill, The Bay’s Chief Implementation Officer, said the district was drawn so that corridors such as 10th Street and Boulevard of the Arts could be improved on the approach to the bay park site.

Ahearn-Koch asked whether it was possible to revise the agreement to allow for a portion of the TIF revenue to be spent on connectivity improvements outside of the district, but again, city staff expressed concern the change would not be palatable to county officials.

Despite any reservations about the specifics of the agreement, Ahearn-Koch joined the rest of the commission in expressing excitement about the potential of The Bay project.

“I know it’s not perfect, but it is a working document, and we are creating something that is really important and really valuable to the region and the city,” Ahearn-Koch said of the agreement.

Despite Some Issues, The Bay Park Funding Plan Presses Ahead
Planning Board Endorses Bayfront Zoning Changes