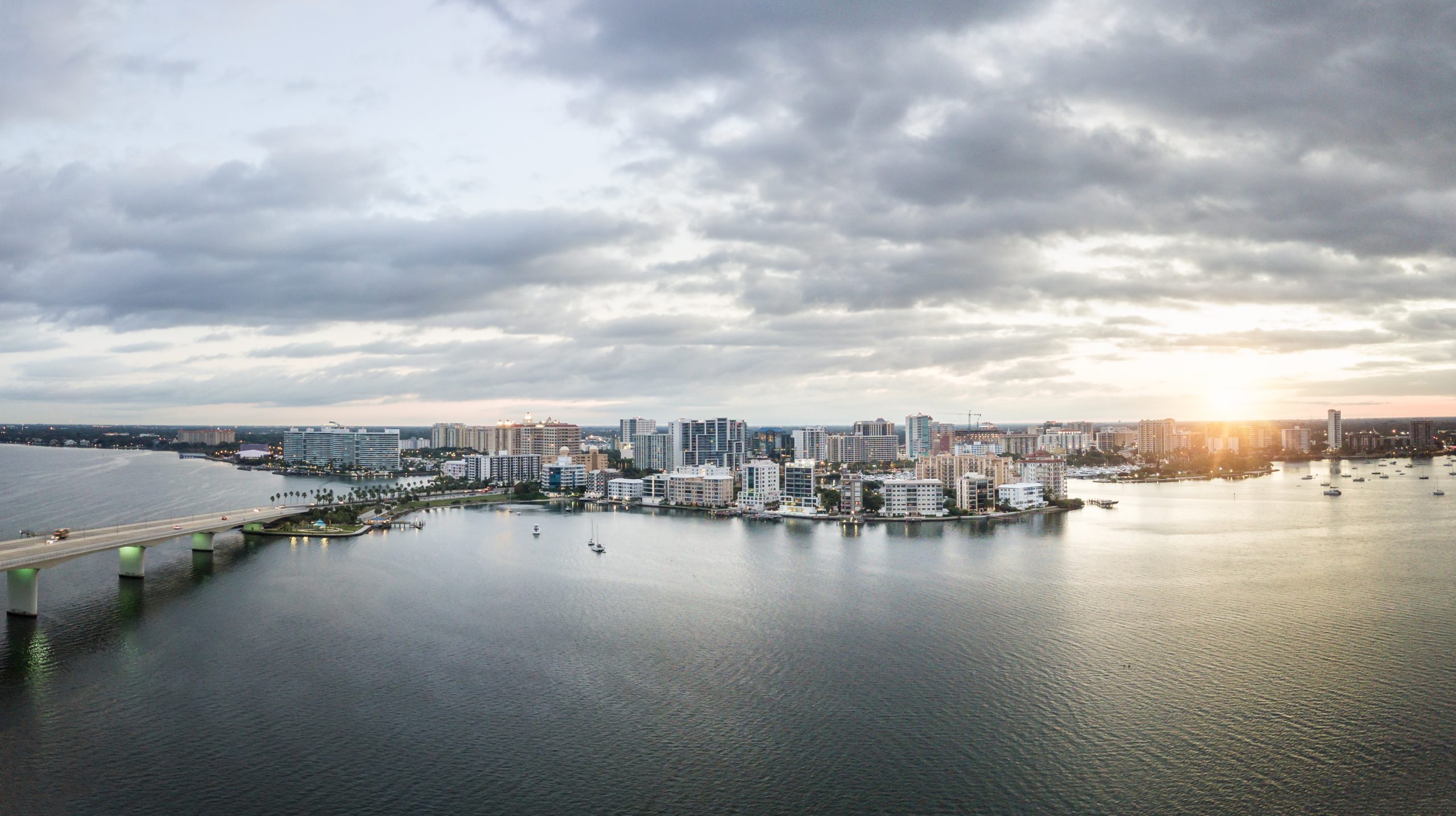 Water, so clear and clean you can see down to the bottom of the bay. Trees filled with nesting birds. Oysters, clams and scallops and fish in abundance. Beautiful green spaces, teeming with wildlife.

No, you are not reading a history of Sarasota. This is the future that The Bay Park Conservancy is creating through its environmental and conservation efforts on and around its 53-acre waterfront park known as The Bay.

“The most important thing is that we have already preserved 53 beautiful waterfront acres for the public, including 1/2 mile of shoreline. It is saved in perpetuity for public enjoyment. And we did it by establishing a park conservancy, the first of its kind in Florida,” said A.G. Lafley, CEO of The Bay Park Conservancy. “This is far and away the most precious and valuable land that the city owns,” he said.

“We are taking away a parking lot, and restoring a bit of the paradise that brought us here in the first place,” said Lafley.

From the very beginnings of the project six principles have remained central to its mission. First, it had to be aspirational. It had to be a blue and green oasis. It had to be connected and accessible for everyone. It had to be programmed (an enlivened destination that people would want to come to). It had to reflect our cultural and historic legacies. And, it would need to be economically and environmentally sustainable.

While the entire project will take somewhere between 10 and 15 years to bring to fruition, work has already begun on Phase 1, which includes the restoration and preservation of coastal wetlands and mangroves, a sunset pedestrian boardwalk extending out into the bay, and open park space, accessible to everyone, where the Conservancy can begin to offer a range of activities and experiences for visitors.

At the heart of it all, Lafley said, is environmental and ecological responsibility – returning our land and waters to the way they were meant to be.

One of the first problems The Bay is tackling is runoff into Sarasota Bay. “Currently, every drop of rain that falls onto this site drains off untreated into the bay. In addition, on the 10-acre Phase I site on which we are now working, half a dozen stormwater pipes bring about 15 million gallons of runoff – much of it untreated – onto our site and down into the bay. Over decades, this has put two to three feet of polluted silt into our bayous and bay,” said Bill Waddill, The Bay’s Chief Implementation Officer.

The Bay is in the process of finishing the design of what is called a nutrient barrier. “It is basically a five-foot by five-foot trench buried two-feet underground at the groundwater level, filled with carbon and mulch. The stormwater travels into boxes that divert it into these trenches, where the carbon converts the nitrogen into something much healthier for the bay.”

The same process will move any polluted groundwater that might be seeping through, such as that resulting from heavy rains or flooding in the area, into these trenches.

There are probably a half-dozen tools in The Bay’s environmental tool kit to deal with this problem, including stormwater marshes. “These are depressed areas that stormwater drains into, allowing the water to filter through the ground and plant material, into the groundwater,” Waddill explained. “If water is draining across a lawn or parking lot and flows into one of these treatment marshes, any physical debris settles there and we pick it up, while oil from the parking lots gets filtered out by the soil and plant materials. The clean water flows down into the groundwater, and out into the bay,” he added. “It is another way of filtering out all of these nutrients which are so dangerous to our bay waters.”

Another tool The Bay will be utilizing is pervious pavement. The 35 acres of parking lot now on the site are impervious. Rain hits and it picks up everything from oil to Styrofoam coffee cups, plastic bags and a host of other trash. With a pervious lot, any rain that falls will percolate through it then move into the groundwater and go through the nutrient barrier before it ever gets to the bay.

Noting that The Bay is working with a big group of environmental advisors, including the Sarasota Bay Estuary Program, Solutions to Avoid Red Tide, the Science Environment Council and, from the state, the Florida Department of Environmental Protection (which will probably help fund some of these measures), Waddill says “it is a true public-private partnership.”

All of these measures are designed to pre-treat nitrogen, convert it and render it harmless to our bay. “While this polluted, nitrogen-filled runoff does not cause Red Tide and other algae, it does feed it and can make it worse,” Waddill explained. “While we are not setting out to solve Red Tide, what we are doing may have a positive impact,” he added.

That is only the beginning. The Bay will also be employing and testing mini-reefs, oyster and clam seeding, and reef balls (half-spheres made of concrete, with holes in it) that attract oysters and clams into its “nooks and crannies,” which is where they like to live. They will also be utilizing vertical oyster gardens (VOGs), which are oyster shells hanging from a rope that can be attached to the underside of docks and piers. When you give the baby oysters a place to attach and grow, they begin filtering the water and doing what comes naturally. Mini-reefs are the same idea, except they float on the surface.

“Over time, all of these mini-reefs end up teeming with life,” Waddill said. “These areas then become estuaries where fish reproduce. All of that improves the water quality, and the biology of our bay and its shoreline,” he said. The Bay will monitor each of these efforts to see what works and what is the most cost effective. “Basically, if the biology improves – more plants, more fish, more wildlife – we know it’s working.”

A lot of the bay’s biological activity occurs around its edges. Mangroves, for example, occur right at the water line. They help stabilize the shoreline, which helps stem sediment runoff into the bay and is also an important habitat for fish, crabs, clams, oysters.

“Once we stop these stormwater pipes from dumping polluted sediment, we will come in and dredge the 2-3 feet of polluted sediment that is already there, which will restore better tidal flow. With the improved tidal flow comes better water quality and better biology,” Waddill noted.

“One of the things that changed from our original master plan was that originally we had two straight piers coming out from Phase I. When we looked at an underwater survey, we found seagrasses, which are crucial to the health of the bay, growing there. We took out the piers and created a semi-circular sunset pedestrian boardwalk in order to protect those seagrasses,” Waddill said. “We are adding transparent decking to the boardwalk that will allow sunlight to reach the seagrasses growing at the bottom of the bay,” he said.

One of the interesting things over by the mangroves is a little island that has almost grown together with the shore. As we dredge, we are going to restore it as an island, and experts tell me that it will become a rookery for birds, because their natural predators will not swim to get over there. We are intrigued to dredge that, create the island, and then see what happens,” Waddill said.

At the Phase 1 site, at the end of the mangrove walk, is “the nest,” where visitors can view a family of ospreys who have taken up residence there and learn about these beautiful birds and their role in our ecosystem. It is all part of The Bay’s commitment to protecting and educating the community about Florida’s wildlife.

“It doesn’t take long for nature to begin to heal herself,” Waddill said. There is also tremendous community value in providing open spaces where people of all ages, all ethnicities, all incomes can come together – a park that is truly for everybody.

There are many other environmental tools The Bay will be implementing, including a softened shoreline (a rock barrier as opposed to a seawall). As Director of Development Veronica Brady noted, “We don’t even know yet all of the things we are going to try. We are experimenting and partnering across the community and across the state, to use Phase I as a living learning lab, taking what we learn and applying it to later phases of The Bay.”

Phase 1: What’s Next in the Development Process?
Phase 1: June 15 Update