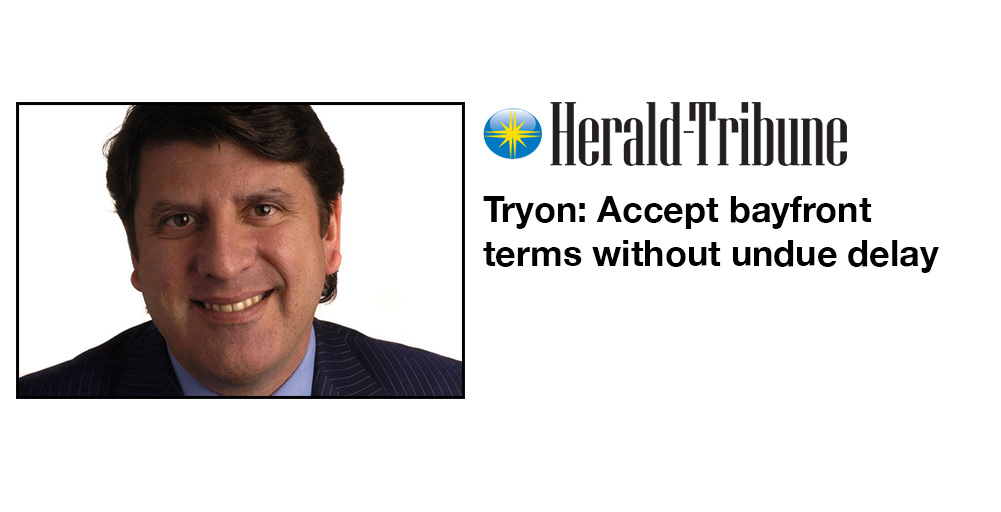 Note: This opinion was originally published by the on February 10, 2019.

The Sarasota City Commission is obliged to diligently protect the public interest while negotiating with the leaders of a citizen-driven initiative to preserve and enhance 53 acres on the bayfront.

But the commission is also obligated to leverage, without undue delay, an unprecedented community-led effort to protect and improve public assets.

Last week, commissioners were presented a term sheet that outlines an evolving process for improving the city-owned property, which is dominated by the aging but vigorous Van Wezel Performing Arts Hall and an asphalt parking lot.

The proposal calls for the newly formed Bay Park Conservancy, successor to the Sarasota Bayfront Planning Organization, the offspring of the broad-based Bayfront 20:20 coalition, to help fund and manage the acreage — with City Commission approval.

The term sheet wasn’t perfect, but it was consistent with the principles and details of a master plan to make the bayfront property more accessible to the public and environmentally responsible.

Several commissioners asserted that the term sheet, a precursor to a detailed contract, was too vague and warranted more public vetting.

Some of the language can be more explicit: While the intent is to ensure that activities on the property (other than say, Van Wezel tickets) are free, the document can be refined in that regard. Also, there is room to make clear: Neither the conservancy nor the City Commission would approve projects unless public and private funds are committed.

But the notion promoted by critics of the plan — that the term sheet and contract are being rushed for nefarious reasons — is B.S.

The city approved, in public, the master plan after an unprecedented public-generated campaign to gain public input on how to make the bayfront property a civic gem.

“Unprecedented” is overused but, in this case, it’s an accurate representation.

The proposals put forth by the Bay Park Conservancy and its predecessors represented public sentiments and are the result of an inclusive process that cost the city and its taxpayers nothing.

The organization does not have unlimited funds. It deserves support from the City Commission, with constructive input, by April 1 or this work will be at risk. (I doubt that the city is prepared to fund additional vetting and public outreach.)

Sarasota has an opportunity to create and maintain, with significant private-sector investments supplemented by overdue public expenditures, a world-class bayfront park that includes cultural and recreational assets.

Unnecessary delay of implementation of what the City Commission has approved, based on unprecedented public engagement? Get real; git r done.

Bayfront plan: Just do it
My View: We have come a long way on Bayfront