The Bay: Protecting Our Mangrove Bayou - The Bay Sarasota 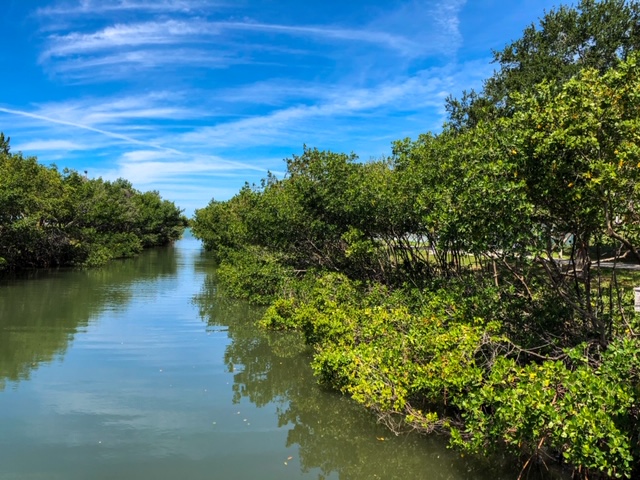 The Bay: Protecting Our Mangrove Bayou

“Mangroves are magical forests where we discover nature’s secrets. They straddle the connection between land and sea and nature and humans. Mangrove forests nurture our estuaries and fuel our nature-based economies.”

Florida’s mangroves and bayous are crucial to our state’s environmental health – providing protection from storms, nurseries for fish, mollusks and wildlife, and recreational opportunities which people can enjoy.

At The Bay, the 53-acre waterfront park located along Sarasota’s bayfront, much of the biological activity of Sarasota Bay occurs right along the shoreline within the tangled root system of the mangrove bayou located just south of the Van Wezel, on the southernmost end of the property.

“When I refer to The Bay’s Mangrove Bayou, I am referring to the system in Phase 1 that includes the tidal water, the mud, and the organisms that live on the floor of the bayou, and then, as it transitions out of the water, the vegetation and habitat that includes mangroves, right on the water’s edge,” said The Bay’s Chief Implementation Officer, Bill Waddill.

This system was originally man-made, Waddill said, and included a boat ramp, which was eventually closed by the city. The city then added some small mangrove plantings, which grew up right along the water’s edge.

There is a second, smaller tidal creek called Hog Creek, also on The Bay’s property. It is located at the northern border of The Bay, and, according to Waddill, it is not nearly as well-developed as the one further south.

These mangroves help stabilize the coastline ecosystem and prevent erosion. They also provide a natural infrastructure that protects populated areas by absorbing storm surge impacts, something we should all be thankful for as we are in the midst of another hurricane season.

Indeed, it has been documented in a study by the Nature Conservancy and the University of California/Santa Cruz, that Florida mangroves prevented $1.5 billion in direct flood damages and protected more than half a million people during Hurricane Irma in 2017.

But that is only the beginning of why mangroves are of such vital importance to the Gulf Coast’s ecological health and well-being.

Mangroves serve as crucial nursery areas for everything from shrimp, to clams, oysters, scallops and a variety of fish, providing both food and safety from predators. Snook, snapper, tarpon, redfish and many more species would suffer tremendous declines in their populations without the safety of healthy mangrove habitats. And, the branches of the mangroves act as bird rookeries and nesting areas for many species, including egrets, herons and many more.

They also help to maintain water quality, filtering out a variety of man-made pollutants – including nitrates and phosphates – which would otherwise run off into the bay. Mangrove forests also capture carbon dioxide emissions and other greenhouse gases, trapping them in their flooded soil.  This “blue carbon” is stored underwater in coastal ecosystems, such as mangroves and seagrass beds.

Of course, aside from all of their benefits to Mother Nature, mangroves also provide a variety of experiences for nature lovers – everything from kayaking, to fishing, snorkeling and bird-watching.

At The Bay, great steps have been taken to protect our local mangroves.

Decades of untreated runoff have produced 2 to 3 feet of polluted silt in the Mangrove Bayou. “We think this is choking off the natural tidal flow into this area, which, in turn, has prevented any seagrasses from growing,” said Waddill. Tidal flow is important because it brings in new brackish water from the bay and circulates it, which helps dilute any potential pollutants. It creates a healthier more stable environment on the bay’s floor for seagrass to grow.

“When we restore the tidal flow and rid the area of the polluted silt, it should spring back to life, bringing with it the seagrasses that are crucial to the habitat,” Waddill explained.

The Bay will also pre-treat any stormwater that currently runs untreated into the Mangrove Bayou and the bay. “The biggest problem we currently have in Sarasota Bay is excess nitrogen,” Waddill said. “So, we are putting in a de-nitrification trench. This is a 5-foot by 5-foot trench filled with a mulch-like carbon material that biologically neutralizes the nitrogen. The groundwater will flow through this trench, get neutralized, and then continue on to the Mangrove Bayou.”

Yet another tool The Bay is using is to create a natural buffer of native vegetation, a “no-mow” zone that will extend 30 feet out from the Mangrove Bayou. The grass will be sitting at least 30 feet away from the mangroves, so it is less likely that the lawn clippings (a source of nitrogen) will blow down into the bayou. It will create an actual buffer zone between the lawn area and the Mangrove Bayou.

Another thing we are especially excited about, Waddill said, is a new partnership with Mote Marine. “We just came to an agreement to have Mote conduct water quality and habitat samples, and also to survey the fish that are using the Mangrove Bayou,” he explained. “We will establish a base-line for what is going on today, and then monitor the area as we improve conditions over time, to see how the ecosystem heals itself. There is no better partner we could possibly have than Mote Marine,” Waddill said.